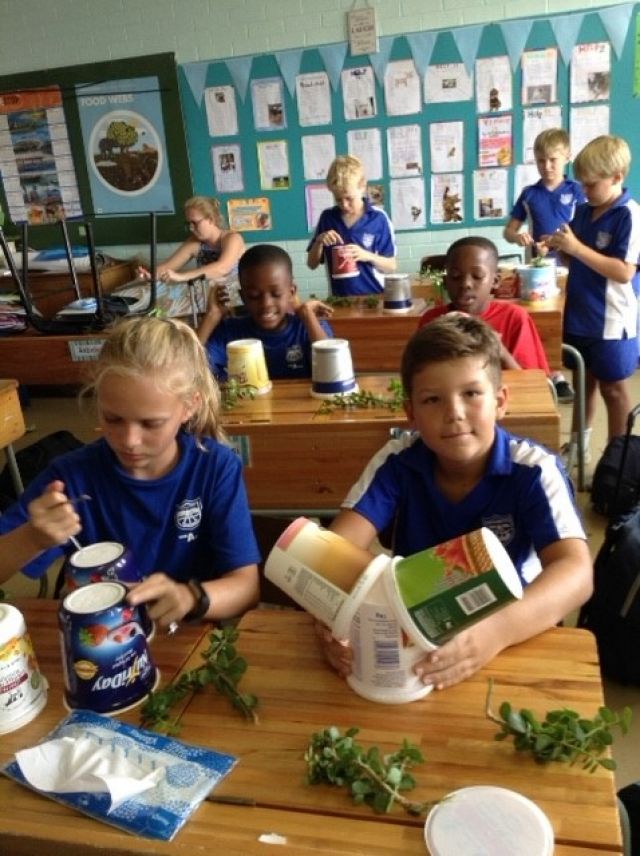 Following on the success of the Spekboom planting and lessons on Global Warming last year, each class in our school is growing a Spekboom slip to participate in a challenge to raise awareness of the value of this plant in our country.( 28 classes = 750 learners) A short explanation of the value of this plant will be shared with the children as well as an introduction to the concerns regarding global warming. Documentation supplied by Julia from Water Explorer in 2019.

Portulacaria afra has a growing reputation for saving the planet and recent research has dubbed the spekboom "an excellent carbon sponge" because of its ability to absorb more free carbon from the atmosphere than most other plants. This amazing succulent can store more than four tons of carbon per hectare, creating what is called a "carbon sink" when planted in large plantations. It is one of the best plants to grow in order to fight against the warming of the earth's atmosphere.

Besides being excellent for binding atmospheric carbon, the spekboom is browsed by many wild and domestic animals, and is a favourite of tortoises. This plant is also called "Elephant Food" in the Eastern Cape because it forms part of the diet of the Addo elephants in the Addo National Park. The leaves have a sour or tart flavour and humans are also known to chew on the juicy leaves for their health benefits. It is also used in salads and stews, and it has been recorded that a small sprig of spekboom, steamed with a tomato bredie, imparts a delicious flavour. Also, the honey made from the flowers is reputed to have a remarkable flavour and texture.

Traditionally the leaves are chewed as a treatment for sore throats and mouth infections. The leaves are also used to quench thirst, and sucking on a leaf is used to treat exhaustion, dehydration and heat stroke. Crushed, leaves are rubbed onto the feet to relieve the pain of blisters and corns, and the juice is applied to skin as a treatment for sunburn, pimples, rashes and insect bites or stings.

Back to News
Previous article
Next article