Case Study
Coastline Clean Up
If we clean up our rivers and beaches we can help to conserve our seas.
Theme: SDG 14 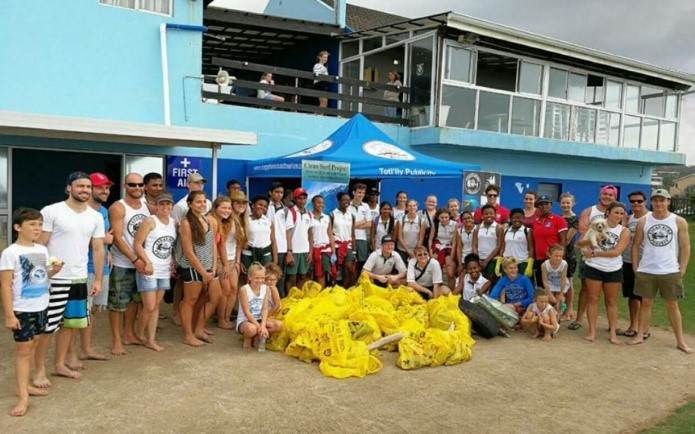 Local schools in the town of Amanzimtoti, South Africa, have been inspired by Water Explorers from Amanzimtoti Primary who are rallying together to clean up the rivers and coast line. They have also joined forces with The Clean Surf Project who are focussed on cleaning up South African shores.
Amanzimtoti Water Explorers realise that rivers are integral to oceans and are often a source of plastic pollution. The team worked together to test the water quality of the local rivers using a global Stream Assessment Scoring System called Mini SASS. Unfortunately the tests done over the years have shown the water quality to be below average. This is due to the mismanagement of solid waste and nearby industries discharging effluent into the river systems. The polluted river water then flows straight into the ocean impacting marine life, as well as mass-littering the beaches. The team regularly runs clean-ups close to their local river to prevent the rubbish from going into the sea.

One beach in particular, about 20km from the school, has been identified as pollution hotspot where for many years litter has been piling up. In some areas it is a metre deep in plastic bottles. This stretch of beach continues for 5km and the local council are not taking ownership of the problem. Amanzimtoti Water Explorers and their neighbouring schools are starting to make a small dent in this enormous problem and together with The Clean Surf project are highlighting and addressing a serious need to deal with the problem.