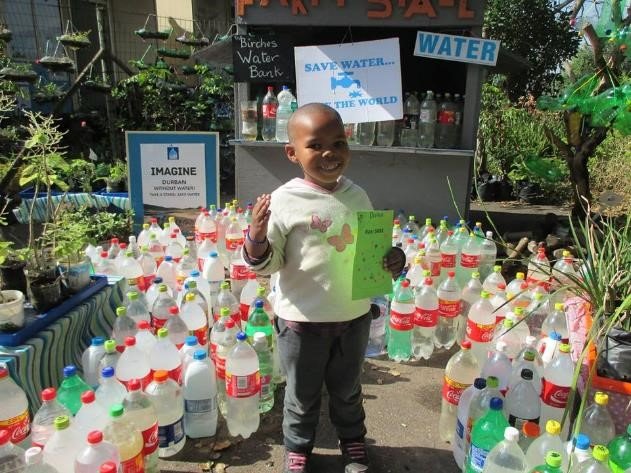 Inspired by The Birches Pre-Primary School Water Bank idea, Phumelelani Primary school decided to start their own grey water bank. Understanding the current water crisis and its link to climate change, the Grade 7 pupils initiated the project and encouraged their friends to bring as many 2 litre bottles to school as possible. Grey water is water that is not too dirty to use again but not safe enough to drink, like washing or bath water.

"Our school relies on borehole water, and due to the drought we are experiencing, our water supply has reached an all-time low, we need to become innovative in the way we use water” commented teacher, Sebe Mbele, the WE team coordinator.

Instead of letting it go down the drain, South African Water Explorers have saved tens of thousands of litres of grey water by bringing it to school to use on keeping the gardens going during the drought, as well as for flushing toilets in some instances.

“Each learner receives one drop to add to our Water Bank wall every time they bring a bottle. The children who earn the most drops win a small prize. They were hugely motivated by this idea,” added Mrs Mbele.

Other teams have run competitions between classes, and the class collecting the most water over a term earns a reward.
More than 15 Water Explorer teams collected over 50 000litres of grey water in 2016, which saved an equivalent amount of freshwater. Understanding the cost it takes to make water clean in the first place is another important driver in this campaign. Saving grey water, saves clean water from being used unnecessarily and ultimately saves energy and money too.