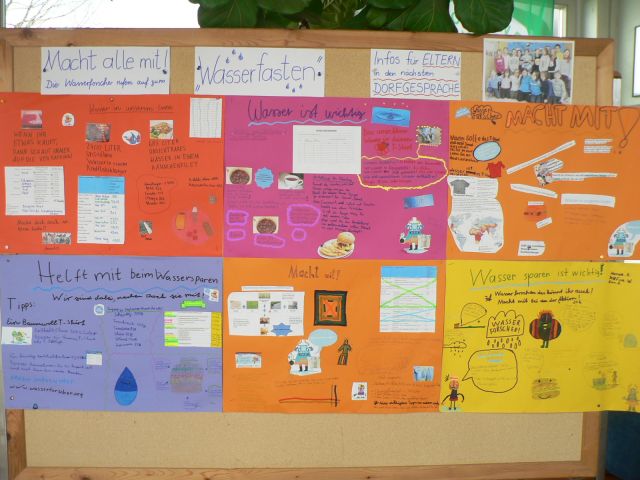 This challenge was the most extensive one so far for the water explorers from Bavaria.

Firstly, they prepared a huge presentation wall where they informed about all sorts of virtual water. They learned how much and why there is so much water used for the production of meat or coffee for example. Visitors could find both information about regional and seasonal shopping and a call for reducing meat consumption. Also, the posters informed about the water intensive production of clothes in poor countries. The presentation wall was placed in the school’s entry where all pupils, parents and other visitors could see perfectly.

Then, at the beginning of the fasting season the water explorers called for action. They wrote an article for the local community newspaper, in which the called for a four weeks period of ’water fasting’. They asked all the citizens to use the attached table to list all saved meat meals, saved coffees and consciously not bought clothe items for four weeks. After that they should put the table in the school’s letter box.

Again the published the results of the ‘water fasting’ to motivate the whole village to continue the good work.

Also, it was nice that there was a exhibition called ‘Climate Factor Humans’ in the town nearby, which the team could visit to get to know more facts about water and climate change. Stay tuned what they plan next…