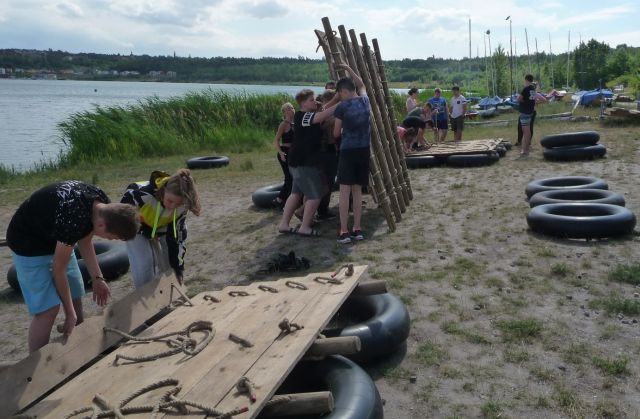 The project started on Tuesday 19. June 2018. We, the water explorers, had a clean up of the school surrounding habitats. We invited the whole class 7a to take part. Class 7b went to another place and removed bulky pieces of rubbish near the famous King Heinrich well – named after the famous German the king who took rule in 919.

Members of the local fishing club fight against the pollution of the water habitats. They watched some students of our school and other people dropping their rubbish avoiding the bins. Wind takes it into the water habitats. Because even bottles and other things are found in the creek „Laucha“ or the ponds: „Großer- und Kleiner Mühlteich“ and „Brauhausteich“ someone must have thrown them there.

After complaining at the mayor´s office the chairman came to our school. So we started our cooperation last year. This year it was the first time that all members of the local fishing club worked together with us. The „DAV Schkopau“ under the special direction of Mr Bernstein supported us in a great way. Each group went with one or two members on their mission. When we were ready they surprised us with a BBQ.

Luckily we can also count on our community administration. They have a „service yard“ with cars, lorrys, tools and other useful equipment. Mr Gomm came with his lorry and provided gloves and plastic bags for collecting the rubbish. We also got the tools like forks.

At 7.30 4 groups started working with 4 teachers and members of the fishing club.
1. Group – Water explorers Nina, Maria, (Marie), Lucas, (Hannes, Tom) and Mrs Dorn
The creek and the ponds - with hands and forks we got the rubbish out. After the severe storm in January called „Friederike“, many trees broke down and the branches were taken into the streams. Because the water flow is blocked we had to remove the wood. We took forks and went step by step along the stream and picked the pieces of wood up for composting.
2. Group - Mrs Müller (Jonas), the water explorers Konrad, Dominik and Thorben (Mohannad)
This group went through the whole area to pick up all pieces of rubbish. If the area is clean it lasts longer until it gets dirty again. They discussed „Who is so irresponsible?“ What can we do? Being a role model ist he first step!
3. Group – (Lucas) water explorers Maria, (Jonas), Maurice, Bastian, Luca and Mrs Schneider
The bulky pieces of rubbish are often found in the bushes. The strongest students found them and put them on a lorry. They also found lots of plastic bags filled with rubbish – thrown into the bushes. Who does it was the question raised. We won´t do that- for sure.

4. Group – the water explorers: Isa, Feli, (Alina) Muhannad, Willi (Monique) and Elisa
Since 2015 we have a school forest. One group weeded the area around the trees and watered the plants. Of course they also picked up all pieces of rubbish.

On Wednesday they got the reward. We cycled to the biggest artificial lake in Germany that used to be a coal mine until 1990, the Geiseltalsee. https://www.geiseltalsee.de
We slept in big barrels on the Campsite and went swimming several times.

A night hike took place at the first evening which took us into a preserved area. We admired the half moon and listened for the sounds of the night. On Thursday we climbed the lookout tower Stöbnitz and had a quiz there.

In the afternoon three groups built their our own floats and moved on the water with them. So they explored the water in a different way.

Because it was the longest day we celebrated midsummer. Parents came and brought food for our party. On Friday we went back home.

Before the students got their diplomas and went on holiday on Wednesday they had met at their tree called OLAF planted in 2015. They found out that the trees suffer the dry season we have now in Germany. So we organised that everyone who comes along waters our tree. And we wrote a letter to the community centre that they include our school forest in the water service.

This was our water festival – we cleaned water habitats, explored the biggest artificial lake and took care of suffering trees in the long lasting heat without rain.

Your German water explorers and their teacher Mrs Dorn